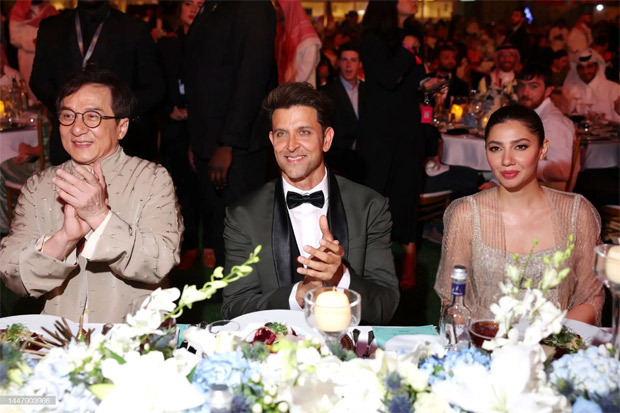 Bollywood actor Hrithik Roshan recently attended the ongoing Red Sea Film Festival in Saudi Arabia. The actor was in attendance to talk about cinema, his next project and how Bollywood has evolved. Now, some photos from the festival are going viral. In one of the pictures, Hrithik is seen with the Chinese legend Jackie Chan and Pakistani actress Mahira Khan.

There are several photos of Hrithik Roshan with the two stars from the festival. The actor even taught the hook steps of ‘Ek Pal Ka Jeena’ to the host at the event in Saudi Arabia. The audience erupted into loud cheers.

Speaking of whether he would like to work in Hollywood, he said, as per Variety, “I look for scripts that come from a place of true passion and imagination and hope to bring that into my films myself.”

He added, “Cinema now is far more real because the collective consciousness of people as a society is growing. The pandemic has had a beautiful change on us; we are far more understanding, far more understood. This has changed our perception of what entertainment should be like. We are asking for something better and better will come. It’s recalibration time.”

“It’s evolved for the better. It’s a process of evolution, we are only going to get better — if you don’t, nature will make sure that you do,” he added.

Meanwhile, Hrithik was last seen in the Hindi remake of Vikram Vedha with Saif Ali Khan. He will next star in Fighter, reuniting with War director Siddharth Anand. The film also stars Deepika Padukone.